Later the frequency modulation (FM) has developed, and it significantly decreased the sensitivity of the received signal to interferences. This method was suitable for high fidelity (Hi-Fi) in wide FM, which is still being used in the VHF band broadcasts. Amateurs and professionals were using narrow-band FM, primarily because only human speech is transmitted, which only requires telephone quality. The main aspect is readability, and recognition is less important. The TELEX, which was commonly used in wire telecommunications, has become popular amongst radio amateurs as well. In the beginning, interface was connected between the radio and the mechanical telex machine.

With the introduction of the computers, especially when the prices of the ZX Spectrum and the Commodore C64 dropped to an acceptable level (many of us still remember the "shopping tours" on the Mariahilfer Strasse in Vienna), many radio amateurs started using the radio teletype (RTTY) mode. This was really the beginning of the digital telecommunication! Almost without a transition, we found ourselves in the PACKET radio era, thanks to the low-cost ZX and C64 machines. Then we already used Bulletin Board Systems (BBS), and could leave messages for fellow amateurs in these systems. These operated in AFSK mode, at a relatively low, 1200 bps (baud) speeed. Then all kinds of new digital modes were introduced, such as the Pactor, Amtor, Sitor, and lately the JT6 modes for weak-signal communication, developed by the Nobel Prize winner K1JT.

Meanwhile, AFSK was replaced by FSK, and its numerous variants, which could easily reach the speed of 9600 bps on FM radios. Compared to the bandwidth we are using on the Internet today, this is considered very slow, but at the time, the transmission of large files and videos was not necessary.

It is interesting, that the digital transmission of voice came rather late. Overall, the real breakthrough came in the second half of the 1990's, by the penetration of the modulation modes and the special IC's for them.  First the NMT450 mobile phones (which were partially digital, partially analog units), then the GSM phones started using the modes. The industrial transceivers started using digital modes rather late, in the 2000's. In Europe the best known system is TETRA.

For the digital voice communication, the voice first has to be digitalized and compressed. This is what VOCODER is good for. The analog signal is first compressed by a dynamic compressor, then digitalized by an A/D converter, and finally compacted.  The nature of the compaction is that the less important content (like silence) is cut, and the rest is compressed by using algorythms, where every bit is carrying important information.  This makes the voice a little "digital", but you get soon used to it... In the same time the error-correcting signals are produced, and packed with the useful signal.  Generally this is done by the modulator IC. One of the most popular, and therefore commonly used error-correcting method is Forward Error Correction (FEC). Then the FM signal is transmitted by some kind of a modulation.

On the receiving side, the things turn around. The received and demodulated signal appears as a digital signal on the output of the demodulator IC, after decompaction and error-correction the VODECODER restores the analog signal (speech), which is then heard in the loudspeaker. The block diagram of the DMR digital modulation is shown on the following picture:

In digital VHF/UHF radio communication, three goups can be differentiated:

The above technologies are compared visually on the following diagrams: 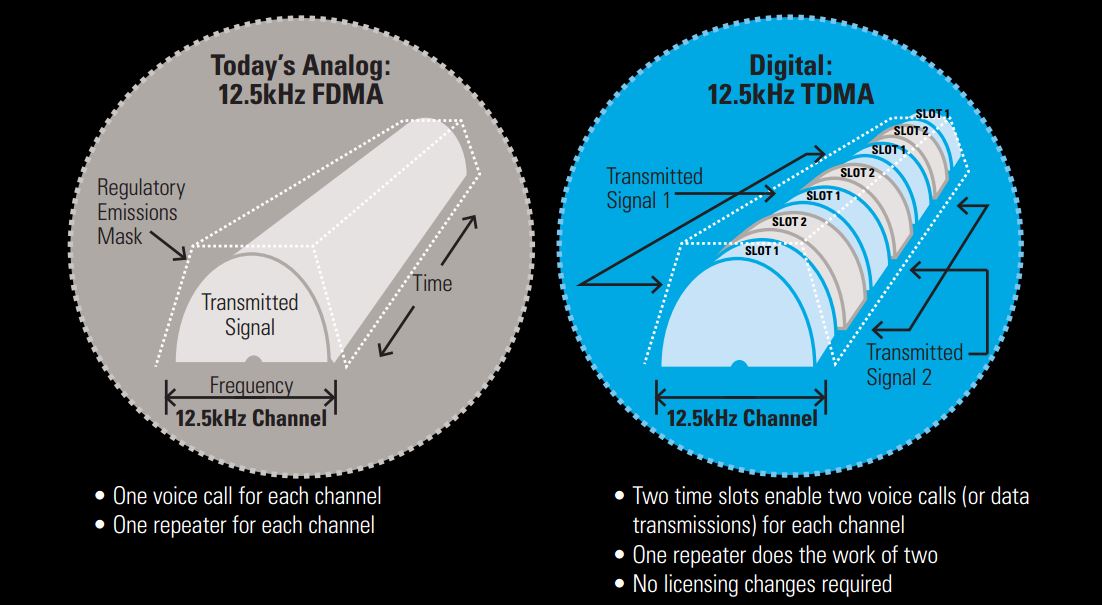 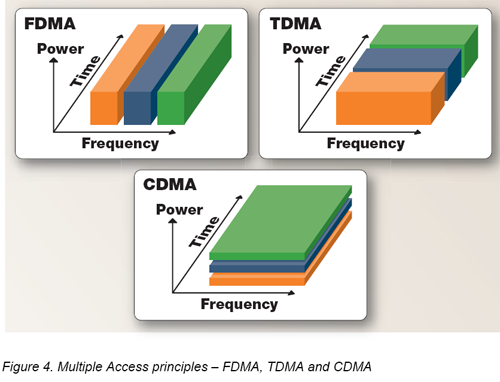 It is an important question, what coverage can be provided, and how does the digitally received signal sound in your speaker?

In analog FM receivers, the other party is heard with more and more noise and sizzle, as we go farther and farther away from the transmitter (repeater), when we finally reach a limit where the signal is breaking up, and we only hear parts of the transmission, but the information can be inferred.

In a digital radio, the aother party is heard crystal clear until the same limit, where the analog signal started to break up. Here the digital reception ceases. That is, until we hear it, it is crastal clear, and then we hear nothing. The error-correcting code systems, which are transmitted together with the useful signal, play an important role in the digital technology.  To put is simple: the receiver can correct the smaller errors, but when there are too much errors, it shuts down the speaker.

In my next article the digital systems of a major amateur equipment manufacturer, and the C4FM mode, will be covered.