Is it worth ordering walkie talkie from overseas?

What do PMR446, FRS and NOAA signify?

With the internet - literally - in our pocket,  we can shop anywhere in the world from anywhere in the world. You can order a transmitter from America, or buy one on a trip to another country. But be careful, because even if the radios look very similar, they may not be usable or compatible with our radios at home (or in any EU country). It is also easy to "run into" radios that cannot be used in EU countries.

What is the Family Radio Service (FRS) transceiver and why is it not good for Europe?

FRS radios are allowed in the US and Canada, but they are not legal to use in Europe. They operate on completely different frequencies than the PMR446 radios that are free to use in Europe.

Before anybody's eyes light up, it is not worth thinking that we might be better off with an FRS radio: the frequencies issued in other countries serve a different purpose due to different geography.
In other words, while in the US or Canada the 462-467 MHz frequencies are used by unlicensed FRS radios, i.e. they are free to use, in the EU and Hungary the same frequencies are used by other services and other systems. In other words, if we try to use FRS radios here, we could interfere with radio traffic that might cause trouble without our knowledge or intention.

So even if a Motorola transceiver, for example, looks almost exactly the same as the ones we use at home, it may not be usable and compatible with other PMR446 radios in this country. 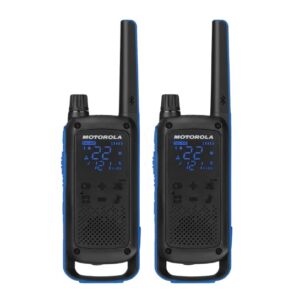 There is another interesting feature on FRS radios that may tempt many to buy. This is the NOAA Weather Alert System, which is used in the US and Canada to alert and communicate information in tornado and other disaster situations.

Here in the VHF range, there are 7 designated frequencies, distributed by state, that operate continuously and provide information at specific intervals. 50 states, 1000 radio stations (you can listen to them online). Dedicated radios monitor these channels, and in case of an emergency, they automatically switch to reception and immediately sound the tornado alarm.

However, this network is not operational in Europe, so even if you tune in to these channels, you will not hear anything from them in Europe. But fortunately, we don't have much to fear from tornadoes or similar major weather events here at home. So the NOAA channel on FRS radio is of no interest in Hungary.

However, PMR446 radios can be useful in case of an emergency - remember that!

If FRS radios come into your field of view, be aware that they are not usable in this country, they are meaningful only if you want to use them in the US or Canada.

Ask before you buy, ask for advice before unpleasant surprises!