10+1 reasons why two-way radios are useful at work

We are aware that using two-way radio makes communication at work faster and smoother, thus improving the efficiency of the daily routines. But do all company managers know this? In this blog post we have collected the most important arguments for the introduction of two-way radios at a company.

1. Save on call charges! Unlimited talk without per-minute and subscription fees 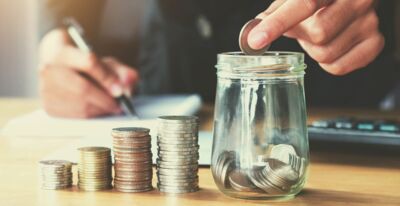 When using transceivers, there are no calling fees; and in case of PMR radios - which are suitable for most users –there are no subscription fees to be paid either.
(Even higher powered transceivers that operate on individually licensed frequencies are subject to an approx. 1000 HUF / month frequency licence fee / transceiver, which is still way less than the usage costs of mobile phones!)
True, many companies have a fleet of mobile phones – but there is a subscription fee associated with them, and also, is it really good that every employee gets a company phone, even those who only have to call his own co-workers? Having the phone in hand all the time does not help to increase efficiency, while making calls outside of the company can result in a higher phone bill. Using two-way radios we can concentrate on the task itself better and talk to other transceivers in the range without restrictions.

2. Save on the number of devices

Each single transceiver can be used by several people alternately, in turns, and you do not have to clear (reset) settings and replace SIM-cards.  Do your colleagues work in shifts? At the end of the shift they return their transceivers and they are ready for use by the next shift.
Is there an occasion when you need more devices than normally? If there are situation which have a higher demand for communication, you can re-organise the distribution of transceivers, or you can even rent extra transceivers for a temporary period.
It is possible that while the radios are used by a set group of your co-workers, the next month you distribute them for a completely different task carried out by a different set of people. At the end of a job or a season, you can let the radios rest on a shelf until the next season – often without any cost. 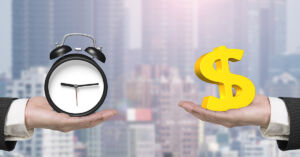 The speed of communication using two-way radios is unbeatable. When using a phone, it might take 15-25 seconds to look up a number, dial, wait for the other phone to start ringing and the other person to pick up. When using a transceiver, you only have to press the Push-to-Talk (PTT) button and speak, other users on the same channel will hear you immediately; and you can expect a reply to your call within seconds. The old commonplace “time is money” is true here as well, with the increased speed of information exchange and being able to give commands results in vastly improved efficiency.

4. No congestion of mobile networks or lack of network signal

Mobile phones rely on a network of cell towers. On the one hand it is an advantage as coverage is widespread, on the other hand it is a disadvantage, because there are cases when this network does not function properly or have white spots on the coverage map, thus rendering mobile phones unusable. Have you ever experienced the effects of congested mobile networks in an emergency situation (e.g. heavy snowing, evacuation practice) or in areas of mass events (like big concerts, etc) when a larger than regular number of people wold like to make calls or send data at the same time?  Or have you experienced outage when working in areas without sufficient coverage by cell towers?
Even if “everything stops” and mobile and internet networks are unavailable, two-way radios will still work as they are independent of any network, you only need some charge in the battery and there you go: communication is guaranteed. Even your radio repeaters can run from batteries, so if you have a system with wider coverage, it will be resilient to loss of electric power.

5. Simple to use, heavy duty

Two-way radios are usually very easy to handle; putting them in use does not require a long reading of the manual, after a quick, minimalistic training or demonstration, your colleagues can start using them immediately. You should be less worried about the impacts of heavy use, shock and dust resistant transceivers can survive more than most smartphones with their giant touchscreens.

6. Group calls at a single press of a button 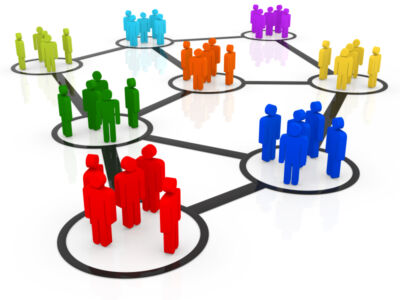 This is yet another feature only two-way radios are capable of. If you want to make a group-call on a mobile phone, you have to navigate through an extensive chain of menu options to set up a conference call. This is a daunting task for most users without the experience and even for those with the experience it will take a few minutes each time. So most people would just call everybody separately in turns. When using transceivers however, all the information and commands can be heard simultaneously on any number of radios (there is no limit!) simply by pressing the PTT button. It Is possible to communicate between two radios, but we can give commands to more (5-10, even 50) people at the same time or create several smaller workgroups.

One single channel can be shared by users, this way you can save on resources when using a licensed and paid-for frequency assigned to you by the authorities. Selective squelch codes can be used to create several independent workgroups and separate them in order to allow communication within their groups without disturbing others. Digital radios allow even easier management and use of separated groups.

Transceivers even offer solutions for those whose voice interactions contain sensitive information: on traditional, analogue transceivers transmission can be encrypted, while digital radios even allow for endpoint encryption. This way group you can enjoy all advantages of group communication without having to do away with information security. 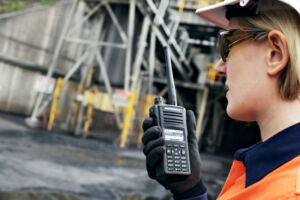 Many transceivers offer extra functions like “lone worker” or “man down”, which can be of help or add some additional level of security to people working in dangerous places (e.g. mines), harsh weather conditions (e.g. extreme heat) or work alone remote from other team members. “Lone Worker” can be regarded as an “alertness” monitoring feature: at some intervals the radio signals the user who has to press a key to confirm being there and safe. Should he not respond to these calls, the radio will send out an alert to other radios. “Man Down” function will alert other users in case the radio remains in a horizontal (laid) position for a longer period. 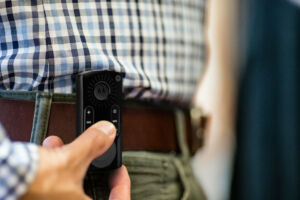 Demands and the working conditions of all companies can be very different: communications equipment might have to penetrate through thick walls, several floors made of concrete, or bridge excessive distances.

Our transceiver portfolio comprises of a host of different models to meet the very different needs companies may require.
There are fully waterproof, impact and even explosion safe models. However, some of our transceivers will also charm you with their looks: being compact and elegant, or featuring a great looking colour display or some extra features.

If all the above will not suffice to convince you, we have one more idea: trust your own ears.
You can test the radios most suited for your company for a whole week without having to pay anything or committing to purchase!
Our experts are at your service by helping you choose the most suitable transceivers for a given environment, however, in many cases it is only an on-premises test that can prove if the equipment can really perform in the given location as expected.
This is why Anico launched its demo program, which allows our future customers to test our transceivers for a complete week and totally free of charge at the location where the devices are to be used.
Should you want to participate in our demo program, please contact Miklós Kerezsi, head of sales at kerezsi.miklos@anico.hu; or call his phone: +36 30 472 8461
Labels attached to the content: hír