MOTOROLA Wave TLK 100i – the first Internet-based Transceiver from Motorola 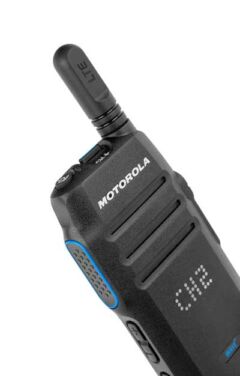 A review of impressions – by the Anico Team

We have constantly been keeping an eye on the developments on the two-way radio market for many years. We know what new technologies have been introduced, who the most popular manufacturers are currently, who the newcomers are, what new products they have released. It was about 6-7 years ago that we met the first company developing internet-based technology; at the time they only had a software application available. As we were visiting the various trade shows one after another in the subsequent years, we realised that step by step the whole expo area became dominated by nothing else but internet-based radio communication.

Big multinational companies usually need a lot of time to develop and adopt novel technologies. For companies who have an established distribution chain of several hundred partners to reach the end-user, it is a lengthy process to design and manufacture suitable products, install servers, sign contracts with SIM-card providers and carriers, plan and prepare the whole legal, sales and service framework and empower the reseller network with all that is needed for distributing the products. The bigger the company and its marketplace, the more demanding task it is to comply with all the different regulations, to align the products and service policies with European, American, Russian and other rules and business practices. Aware of this, still, we were anxiously awaiting the moment when Motorola would enter the arena with its own internet-based two-way radio solution. By 2018-2019 all major manufacturers had already introduced their own PoC models. Finally, in 2020 Motorola introduced its first internet-based PoC communication system, called Wave, which was re-branded to Wave PTX at the beginning of 2021.  Since its launch, we have tested the TLK 100i transceiver on several occasions, in different environments.

Unboxing at the outbreak of the Covid19 pandemic 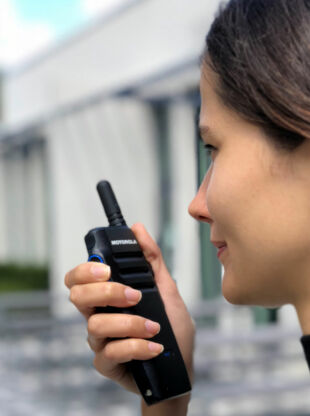 The first TLK 100i demo transceivers arrived at our Budapest office at the time when the pandemic first hit Hungary. When new test radios arrive, we are always very excited to see what’s hiding in the boxes. At first glance, we saw the twin brother of the SL1600 model: industrial, yet stylish design with no display. It may look a simple transceiver, but inside, there is something completely different. We only realised this after we turned the radios on for the first time.

But let’s not jump this far ahead yet!  Let’s start at the design. The radio has a very pleasant, high-quality finish that does not only make it an industrial transceiver for factory workers, but it is so stylish that it can also be used proudly by employees in any elegant retail store. In the recent 1-2 years, Motorola has started to pay extra attention to the looks of their radios (see for example the CLPe model or the SL series.) It is a curved, slim transceiver that fits very nicely in the hand. There is no huge display, not a long line of buttons, only some easy-to-reach controls. There is nothing that would suggest it is not a traditional transceiver. It can be used easily by anyone, no extra knowledge is needed.

We have often requested from our contacts at Motorola to design and manufacture entry-level products, without a display or a long row of buttons and extra features. Motorola products have always represented a higher level of quality, it is why their pricing cannot be compared to other, usually Chinese-made transceivers. It is therefore very difficult to sell premium grade Motorola transceivers on the price-sensitive Hungarian market (think of, for example, the DP4000 ATEX series with a price tag of nearly half a million HUF a piece), and this is why we are constantly lobbying for basic transceivers that are priced at a level acceptable even in the Central-Eastern European region. 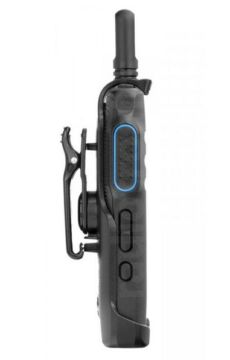 The typical user will never realise that the heart inside the TLK100i is a small computer running the Linux operating system. In the standard kit, power is suupplied by a 2500 mAh Li-Ion battery that can be charged through the Micro USB port on the side of the radio.

It was only recently that we realised that Motorola has also started to follow the trend that the transceivers can also be purchased without a battery charger. In case of the TLK100i we have several options: we can buy the transceiver with or without the charger, or with a separate, docking charger. The basic price does not contain the charger, it costs 17 EUR extra.  Customers may ask – and they are very right to ask so – why Motorola cannot include a charger in the box; especially in the box of a radio that is in the premium price range. We believe it is environmental policy, but we are going to ask Motorola during a forthcoming Zoom meeting and update this article with the official answer. (The same issue arose recently concerning the desktop charger of the Talkabout walkie talkie series, the new packaging of which do not contain the mains adapter anymore.)

Standard accessories included are a belt clip, the antenna, and the aforementioned battery.

About 15 seconds after turning on, the transceiver connects to the network and a voice announcement tells us which channel we are on. But it is not only the voice prompt that lets us know the radio is turned on. A blue dot-matrix LED display becomes visible behind the black front panel of the radio. This hidden display technology is now used in many Motorola radios recently (e.g. T82, T82 Extreme, SL1400 series).

The biggest surprise came when we heard our test partner through the speaker of the radio. Without doubt, Wave TLK100i has the best sound quality of any transceiver in our portfolio. Period. This surprise made us immediately understand why this radio has a significantly higher price than other PoC radios on the market.  There is no hiss, no digital artefacts, no robotic voice. If something can sound crystal clear, this radio definitely does. This exceptionally good audio quality was achieved by Motorola by using low-loss codecs, resulting in 3-4 times the bitrate used by other manufacturers.

This extraordinary audio quality has a price though: the radio can only use 3G and 4G broadband networks, and of course, WiFi. Most competitors accepted more aggressive compression levels and lower bitrates, thus sacrificing audio quality for the ability to use slower, but more widely available 2G networks and consume less mobile data. Wave’s excellent audio quality demands bandwidth and uses more data.

Mobile data usage is not the user’s concern though: the transceivers come with a built-in, unremovable SIM card, which can be used anywhere in the EU. The annual Wave subscription fee includes unlimited usage of the transceiver. On the plus side, the transceiver is not bound to any one particular operator’s network, it will always use the best network available in a given location. 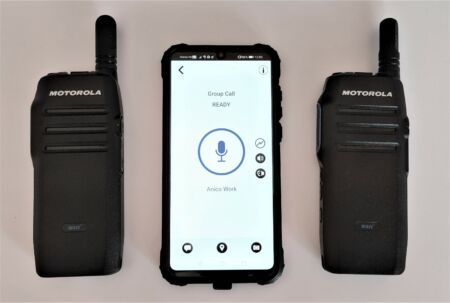 Being a modern device, besides WiFi, the radio also sports Bluetooth and GPS. The geographic location of the device can be tracked using the Wave PTX application and also the map of the Wave dispatcher software.

Bluetooth allows the connection of advanced wireless audio devices developed for the Wave product line, such as a Motorola Bluetooth microphone handset which is already available. It is also possible to use an ordinary Bluetooth headset with the transceiver, but then we still have to use the PTT button on the side of the radio. Besides Bluetooth devices, traditional, wired headsets and handsets can also be attached. Such devices are available from Motorola.

Programming of the radio can be done using a cloud solution. It is an internet-based device which comes with a pre-installed data SIM, so why not just manage the configuration settings remotely? This way there is no need to buy a separate programming cable, you only log into the Motorola Wave administration website using any browser on a PC or a smart device. Using this remote configuration console, you can program and re-program the radios as needed, or you can add WiFi networks to a transceiver without the need to connect a cable or physically collect the radios from the users. Whenever you set a parameter on the web, the new configuration is pushed to the radio over the Internet and gets activated within a few seconds, so the user can start using the new settings immediately without having to take the radio to the office.

As usual with internet-based transceiver technology, customers who choose the TLK100i, need to calculate with periodic licence costs. In case of Motorola, the annual licence fee includes server usage fees as well as access to the cellular internet network using the inbuilt SIM-card. There are different licences depending on the functions the user wants to use. Licence fees start at EUR 180 per transceiver, which fee is payable every year if you want to use the radio. 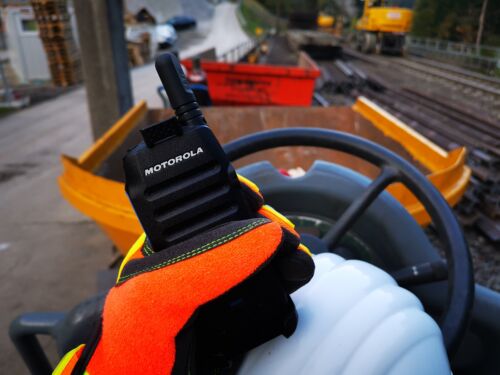 This handheld transceiver is user-friendly, stylish and most importantly: it can be used in industrial environments. This model is anything but cheap for the Hungarian market, however it provides astonishing audio quality, looks good with its hidden, functional display, and can be programmed and managed remotely from a central web-based interface.  It can be used Europe-wide with an unlimited range offering a very versatile system that can replace expensive repeater systems. This can be saving costs for companies who need a coverage wider than what handheld transceivers can provide without the installation and maintenance of expensive fixed repeater stations. 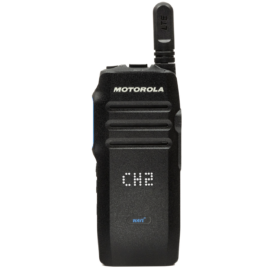 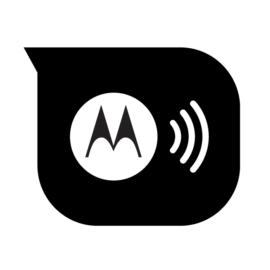 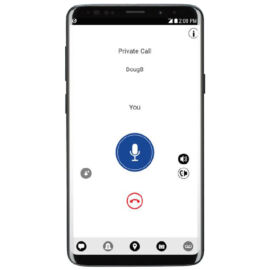 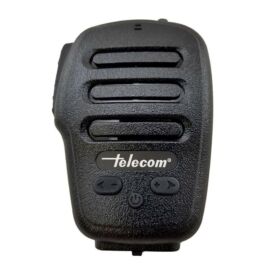